The history of the emblematic building of Insurgentes 25.

In 1734, Father José Hipólito de Aguado and a group of clergy from the church of the Oratorio founded a home for poor women who had been abandoned by their families, husbands or that were widows called the Home of Our Lady of Santa Ana.  This institution was maintained through gifts from San Miguel de Allende´s wealthy citizens.

When Doña María de Retis, the great grandmother of general Ignacio Allende died in 1743, she donated $100 pesos to the Home.  Over the years a great number of San Miguel women lived in the Home.  Some got married, others became nuns and others spent their entire life in the Home.

In 1862, the Home was expropriated by the government during the War of the Reform and the occupants were expelled.  The building was abandoned and later became a market.

In 1954, the Library was created and operated out of a private home and in 1958, moved to the present location of Insurgentes 25 where it celebrated it´s 68th anniversary offering a series of cultural events. 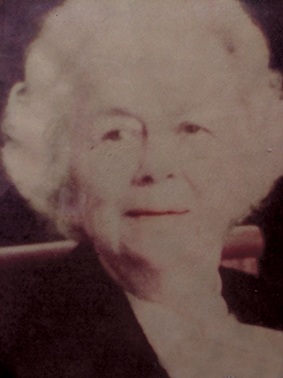 BIRTH OF AN IDEA

In 1954, Helen Wale invited young Mexicans to her house on Hospicio street to make use of her large collection of magazines.  Word got around and she had to bring in additional chairs and tables to accommodate the number who arrived.  A number of other foreign residents offered to help out.  By 1955, it became necessary to rent a larger space.  In the new location, Helen Wale and her volunteers brought in additional educational material and created a collection of fairy tales in English but translated to Spanish.  This addition was a great success and American students began to donate English language books translating them into Spanish.  The volunteers were happy with the success of their efforts, thus in 1957, they decided to ask the governor of Guanajuato, Jesus Rodriguez Gaona, for a more adequate space for the Library to better serve the community.  The next year, the governor offered them lodging in the building at Insurgentes 9 which then became number 25.

A number of fundraising events were organized to collect the $20,000 pesos needed to begin the restoration of the building.  Later the state contributed $161,234 pesos.  Once the restoration was complete, Governor Rodriguez Gaona officially inaugurated the Library on Sunday, November 25, 1958.  In the contract with the state, that was authorized by the Federal Government which had title to the property, the building was legally transferred to the Public Library of San Miguel de Allende.

THE FIRST PROGRAM designed to support the activities of the Library was the Homes and Gardens Tour, afterwards there were post cards made by children with the help of volunteer painters.  From this effort, the idea of opening a gift shop was born.

Activity grew such that it was eventually necessary to hire a full-time librarian, professor Benjamin Garcia, who then trained Mr. Juan Manuel Fajardo to handle the job.

In 1975, the Library began to publish Atención and in 1982 it began a program of rural libraries.  This project contributed books to 350 rural schools.

In 1993, the area where the Theater and Santa Ana Café are located was the property of the Briones family.  The Library was never able to reach an agreement with the family to purchase  that building but when the last member of the family died, the government added this property the 1958 contract with the Library.

In the Sala Quetzal, next to the Café, there is a Latin American Studies collection.  This room was named by Toni de Gerez, the principal promotor of the collection.